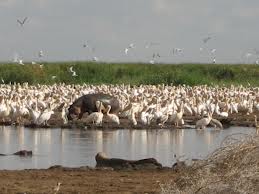 We will pick you from Arusha and transfer you to Lake Manyara. Nestling at the base of the Great Rift Valley escarpment, the park is recognized for its incredible beauty. You can see many game animals such as Buffalo, Elephant, Giraffe, Impala, hippo and others and if you are lucky you can see the famous tree climbing lions. Lake Manyara is a great bird sanctuary inhabited by many different species of water birds and huge flocks of flamingos. Later on in the day you will leave the national park and proceed to the cooler crater uplands, where you will overnight at, Ngorongoro farm House or similar accommodations. Lunch box and dinner included.

After breakfast you proceed to Ngorongoro Conservation Area. After arrival you descend into the crater for a wonderful game drive (with a picnic lunch) inside the Ngorongoro Crater considered as an UNESCO World Heritage Site. As very few animals migrate in and out of the crater with its 2000 ft. high walls the Ngorongoro Crater has the highest wild animal density worldwide. Among the species are lions, elephants, zebras, hippos, flamingos, jackals, rhinos, antelopes, many birds and other species. You might expect to see the ‘Big Five’ in one day. Overnight at Ngorongoro Sopa Lodge or Ngorongoro Farm house. All meals included.

In the morning when the morning mist has cleared away (depending on weather) you go on a Nature Walk at the Northern Crater Rim of Ngorongoro Crater inhabited by buffaloes, elephants, baboons, monkeys and different species of birds. Escorted by a ranger or Maasai Guide you follow animal paths through dense bush.

Afterwards you return to Arusha with arrival early afternoon. Breakfast and lunchbox included.

We're not around right now. But you can send us an email and we'll get back to you, asap.